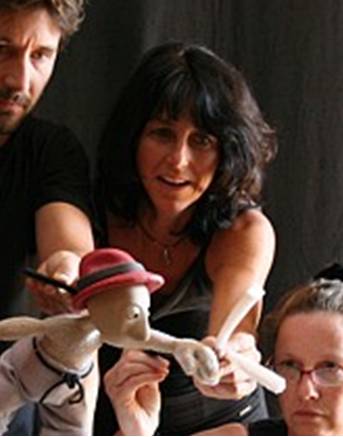 Following on from her theatre studies at Piccolo Teatro di Milano, Marina moved to France where, in 1990, she set up her own theatre company. Supported by a faithful team, she wrote, produced and constructed shows in a language capable of reaching the spectator beyond the means of words. Her aesthetic choices veered mainly towards the creation of images, a theatre of metaphors, joining the revival of puppetry in France. Her works have travelled the globe. Amongst the better-known : 'Faux Départ', 'Colère polaire', 'Souvenir d'un pantin' (audience choice award Cannes '98), 'Cargo'... And the trilogy for young audiences : 'La Nuit s'en va le Jour', 'Fragile', 'Cité'.

"I imagine the theatre as a crossing point between reality and fantasy... To be present as the doors open, as hosts of our house of waking dreams. To share, in a close and intimate way, the breathing of the audience, feel their thrills, hear the words escaping their lips, to be captivated by their laughter and their tears."